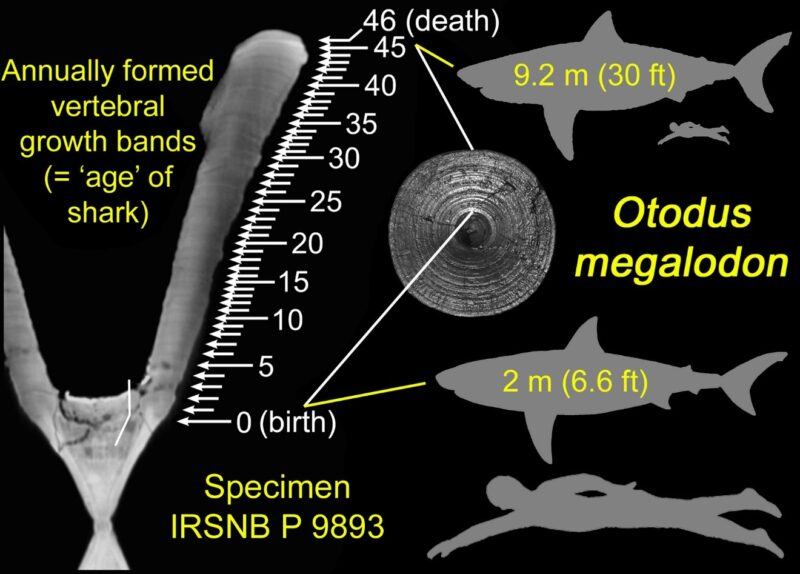 : Identified annual growth bands in a vertebra of the extinct megatooth shark Otodus megalodon along with hypothetical silhouettes of the shark at birth and death, each compared with size of typical adult human. The vertebral specimen is housed in the Royal Belgian Institute of Natural Sciences in Brussels (DePaul University/Kenshu Shimada)

A new study shows that the gigantic Megalodon or megatooth shark, which lived nearly worldwide roughly 15-3.6 million years ago and reached at least 50 feet (15 meters) in length, gave birth to babies larger than most adult humans.

Although Otodus megalodon is typically portrayed as a super-sized, monstrous shark in novels and films such as the 2018 sci-fi film “The Meg,” scientific data support a more modest but still impressive estimate of about 50 feet (15 meters) for the presently known largest individuals. The study indicates that, from the moment of birth, Megalodon was already a big fish, noted Kenshu Shimada, a paleobiologist at DePaul University in Chicago and lead author of the study. Co-authors are Matthew Bonnan, Stockton University, New Jersey; and Martin Becker and Michael Griffiths, William Paterson University, New Jersey.

“As one of the largest carnivores that ever existed on Earth, deciphering such growth parameters of O. megalodon is critical to understand the role large carnivores play in the context of the evolution of marine ecosystems,” said Shimada.

Otodus megalodon has a rich fossil record, but its biology remains poorly understood like most other extinct sharks because the cartilaginous fish is primarily known only from its teeth. Nevertheless, some remains of gigantic vertebrae are known, said Shimada.

Researchers used a CT scanning technique to examine incremental ‘growth bands’ putatively recorded annually (analogous to tree rings) in Megalodon vertebral specimen housed in the Royal Belgian Institute of Natural Sciences in Brussels. Measuring up to about 6 inches (15 centimeters) in diameter, the vertebrae were previously estimated to have come from an individual about 30 feet (9 meters) in length based on comparisons with vertebrae of modern great white sharks, according to the researchers.

CT images reveal the vertebrae to have 46 growth bands, meaning that the 9-meter Megalodon fossil died at age 46. By back-calculating its body length when each band formed, the research suggests that the shark’s size at birth was about 6.6 feet (2 meters) in length, a result that suggests Megalodon gave live birth to possibly the largest babies in the shark world. These data also suggest that, like all present-day lamniform sharks, embryonic Megalodon grew inside its mother by feeding on unhatched eggs in the womb — a practice known as oophagy, a form of intrauterine cannibalism.

“Results from this work shed new light on the life history of Megalodon, not only how Megalodon grew, but also how its embryos developed, how it gave birth and how long it could have lived,” said co-author Becker.

Interestingly, ‘early-hatched embryos’ in the shark group called Lamniformes will begin to eat surrounding unhatched eggs, and at least in the present day sandtiger shark, occasionally even feed on other hatched siblings for nourishment, the researchers noted. The outcome is that only a few embryos will survive and develop, but each of them can become considerably large at birth.

Although likely energetically costly for the mother to raise such large embryos, newborns have an advantage because their large size reduces chances of being eaten by other predators, said Shimada.

“The information presented in this new paper and our other recent work [https://www.tandfonline.com/doi/full/10.1080/08912963.2020.1812598] demonstrating just how large Megalodon was relative to other sharks have greatly increased the understanding of the Megalodon biology,” said co-author Griffiths.

Added co-author Bonnan, “My students and I examine spiny dogfish shark anatomy in class and to think that a baby Megalodon was nearly twice as long as the largest adult sharks we examine is mind-boggling.”

The study also shows that the shark grew without significant ‘growth spurts’ at an average rate of about 6.3 inches (16 centimeters) per year at least during the first 46 years of its life according to the data. This finding indicates that Megalodon was sufficiently large (6.6 feet) at birth to compete with other predators and to avoid being eaten. Further, a growth curve model based on the vertebrae appears to indicate its life expectance of at least 88-100 years, noted Shimada.

The study, "Ontogenetic growth pattern of the extinct megatooth shark Otodus megalodon—implications for its reproductive biology, development, and life expectancy,” will appear in the forthcoming issue of Historical Biology and is available online at https://www.tandfonline.com/doi/full/10.1080/08912963.2020.1861608. This collaborative work was made possible through financial support from the National Science Foundation to Kenshu Shimada (Award Number 1830858) and to Michael Griffiths and Martin Becker (Award Number 1830581).